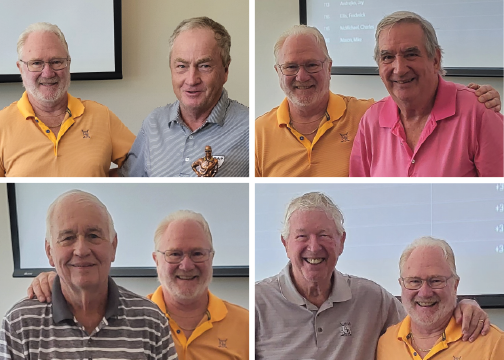 After nine rounds of play, the 2022 OPMGA double elimination Match Play Championship concluded when Bob Long beat Bill Stafford 4-3 on Sunday, Aug. 21. Stafford defeated Long 1-0 in the eighth round, forcing the final match.
The field of 28 players began match play in late May. That number was cut in half after three rounds of play and was then halved again after the fifth round, when only seven players remained.
Long eliminated Dave Hanna in round six, while third-place finishers Darin Stuiber and Larry Perrone defeated Mark Watts and Bob Kessler, respectively. Hanna, Watts and Kessler will share fifth-place prize money.
The 2022 OPMGA Match Play Championship winners were:

First place: Bob Long
Second place: Bill Stafford
Third place (tie): Darin Stuiber and Larry Perrone
Fifth place (tie): Mark Watts, Dave Hanna and Bob Kessler
The OPMGA held its Senior Championships on Saturday, Aug. 13.
Participants in the event were assigned flights by age. The Super Senior Division for those 80 and older played from the red tee boxes, while the Senior Division played from the traditional gold tees.
In all, 44 OPMGA members participated, including eight from the Super Senior Division.
Of the Super Seniors, both Tom Cronin and Bud Humphries carded gross scores of 78 that were tops in that age group. Cronin was awarded Super Senior Champion based on a match of cards, while Humphries received the award for low net with a net score of 71.
Bill Stafford was the closest to the pin winner for the Super Seniors. That contest happened on the 16th hole.
In the Senior Division, Scott Kimmel shot one under par 35 on the front nine on the way to a gross score of 77 to win the OPMGA Senior Championship. Bob Long was one stroke behind with a 78 and took home the overall senior low net award with a net score of 67.
Craig Binetti won the seniors’ prize for closest to the pin, playing on the seventh hole.
Senior Championship flight winners included: