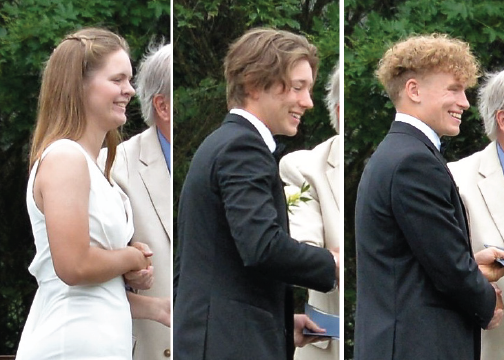 The scholarship committee of the Golf Members’ Council each year honors students who show an interest in the game of golf and have exemplary academic and extracurricular records.
Bob Long, scholarship committee chairperson, said awards are given on behalf of Ocean Pines Golf Club members who support the fund throughout the year.
He said members have raised more than $45,800 for scholarships over the last seven years, including $21,500 during the last two years.
This year, Riley Schoch from Worcester Preparatory School was named the Scotty Wheatley Scholarship winner. Long said Wheatley helped significantly boost donation amounts, which had been $2,000-$3,000 each year, prior to 2016.
“Scotty ran the OP-Taylor Bank Scramble for a couple of years and is largely responsible for the increase in awards,” Long said. “Scotty died in February 2021, and his family asked that donations in his name be made to our scholarship fund. Over $3,400 was received, and for the past two years we have attached Scotty's name to one of the scholarship awards.”
The 2022 Scholarship recipients are:
Scholarship funds come from the Ocean Pines-Taylor Bank Scramble and other golf member initiatives.
This year's scramble is set for Wednesday, July 13 at the Ocean Pines Golf Club.
The public entry fee is $120 per person, which includes greens fee, cart, team prizes, men’s and ladies’ closest-to-the-pin prizes, door prizes, continental breakfast, on-course refreshments and lunch at the Ocean Pines Clubhouse Grille following the tournament.
The entry fee for Ocean Pines Golf members is $75. The cart fee is extra for those without a cart package.
Players may sign up individually or as a foursome. Individuals or incomplete teams will be paired.
The entry deadline is July 6. To download an entry form, visit https://www.oceanpines.org/documents/10184/89280/Taylor+Bank+Scamble+entry+form.pdf.
Taylor Bank is the longtime event Title Sponsor.
Platinum and Gold level sponsorships are still available. To download a sponsorship form, visit https://oceanpines.org/documents/10184/89280/Taylor+Bank+Scramble+sponsorship+form.docx.
Tee sponsorships are available for $50 for businesses and nonmembers, or $40 for golf members. To download a tee sign sponsorship form, https://www.oceanpines.org/documents/10184/89280/Taylor+Bank+Scamble+tee+sponsor+form.pdf.
Entry and sponsorship forms may also be picked up at the Ocean Pines Golf Club. Fees may be mailed to Ocean Pines Golf Members’ Council, PO Box 1356, Berlin, Maryland 21811. Checks should be made payable to “Ocean Pines Golf Members’ Council.”
For more information, contact Steve Howse at 571-239-8469.