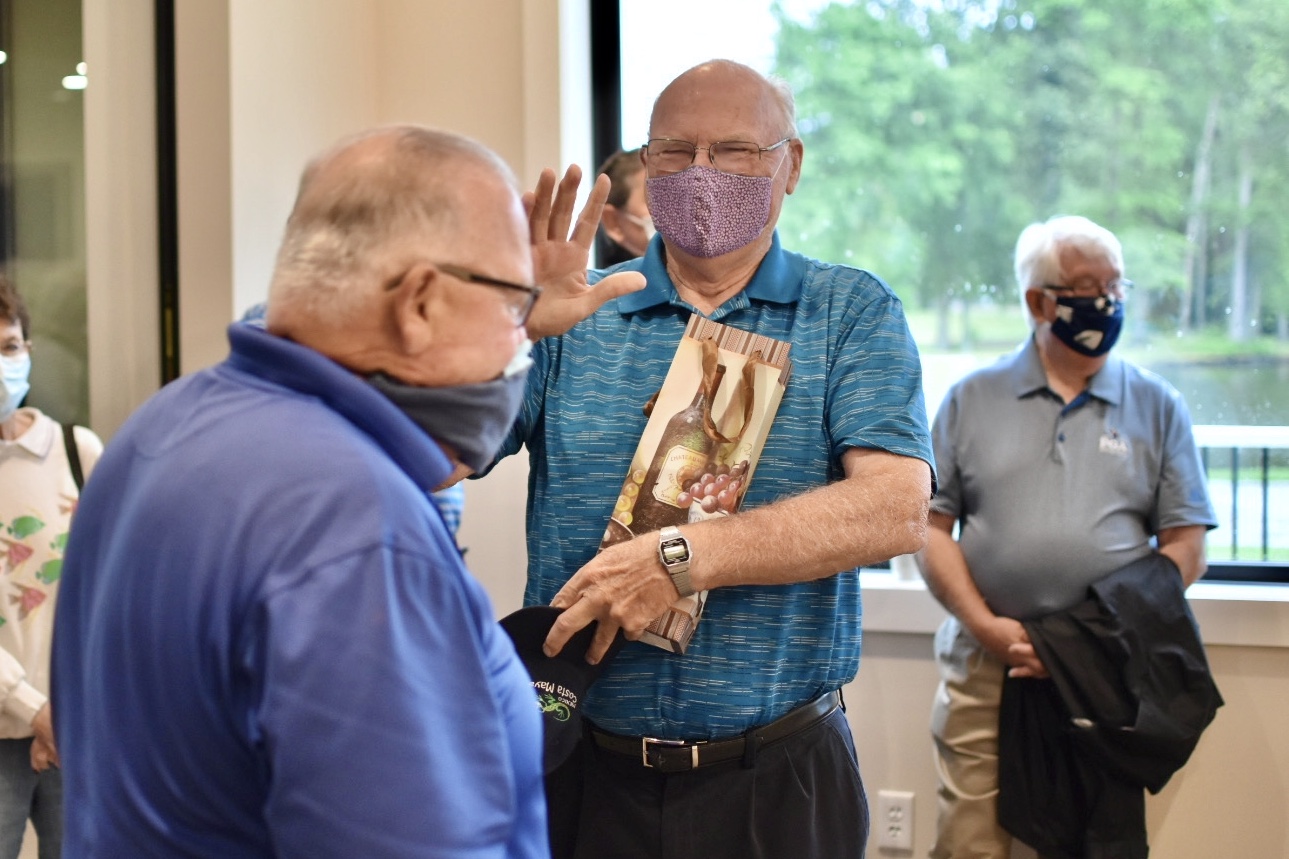 (June 17, 2020) “Teamwork” was the word of the day, as Ocean Pines officials held a grand opening ceremony for the new Golf Clubhouse on Wednesday morning.
The Ocean Pines Board approved the project in April 2019 at a guaranteed maximum cost of $1.6 million.

Salisbury architectural firm Davis, Bowen and Friedel, Inc. developed plans for the roughly 7,200 single-story building, which includes a large meeting room and space for a new restaurant, along with an outdoor deck, pro shop and club-fitting area.

Absolute Demolition of Ocean City took down the former two-story clubhouse last May, and the Whayland Company, based in Laurel, Delaware, began construction in October.

The project officially wrapped last month, at a final cost of about $1.49 million, General Manager John Viola reported during a recent Board meeting.
Many people, officials said, contributed to the project’s success.

“This is a really momentous occasion,” Association President Doug Parks said on Wednesday. “A lot of people were involved in the success of creating this wonderful new building that we have.”

Parks mentioned several who he said were instrumental, from the initial concept to delivery of the finished product.

“When we first looked at the idea of renovation versus rebuilding, we thought we didn’t have enough expertise in that area, so we called in some folks who were very well versed [and] had lots of experience in construction,” Parks said.

Steen was brought on at the beginning of 2019 to advise the Board on what was then considered to be a renovation of the former 40-year-old building. Upon closer inspection with Viola and Public Works Director Eddie Wells, however, Steen apparently changed his mind and famously told Association officials they would be better off to “tear the damned thing down.”

“The idea of pulling expertise to help the Board better understand the problem and the options we had was a very good idea,” Parks said.

He also credited the Whayland Company, especially Steve Hentschel and Mark Figgs. Additionally, Parks thanked the entire Board, including former directors Esther Diller and Ted Moroney, for their support.

In particular, Association Vice President Steve Tuttle, Parks said, was helpful as Board liaison during construction.

“I would be remiss if I didn’t mention our general manager, who helped [with the] coordination that’s involved in the various parties,” Parks said. “John, thank you for all the work that you did.”

Lastly, Parks highlighted Public Works, who contributed both experience and manpower to the effort.

“Their guidance and their specific knowledge … was also instrumental in getting things up and running,” he said.

Parks said the building would serve a dual purpose, with space for golfers, but also ample room for comminity groups to meet.

“I don’t think anybody can argue [it’s] a really, really wonderful building,” he said.

Viola, speaking next, said it took “a total team effort” to bring the Golf Clubhouse to completion.

“To do something like this, you have to start with the Board,” he said. “When you take on a project like this, you want to surround yourself with good people … people that have expertise.”

Viola said among the first things he did was contact Brown and Steen, as well as designer Bill Stamp of Steen Associates, Inc.

“I can’t even tell you … how much time and how much knowledge [and] expertise was put into this building,” he said, also singling out Wells and Nobie Violante of Ocean Pines Public Works. “The work they did … was one of the main reasons why this project was under budget.”

Wells and Violante worked closely with Worcester County officials on permitting and other matters, and Viola underscored the importance of that relationship.

The “relationship that [Wells and Violante] have built over the years with the county … made this building happen,” he said.

“I worked with them every day. [Their] team did an excellent job on this building,” he said. “I would work with them any time.”

Viola credited Reid Tingle of the Bank of Ocean City as a good business partner, and thanked him for his contribution to the new patio. He also thanked Bryan Taylor and Public Relations Director Josh Davis, for helping to secure a new golf leaderboard.

As for the dining, Viola thanked the Matt Ortt Companies, who helped design and will run the all-new Clubhouse Bar and Grille.

He also highlighted designer Tobie Jacobs, for guiding the aesthetic look of the building, from the interior rugs to the outdoor deck railings.

“Tobie did all the design … [and] made my life a lot easier,” Viola said. “She did great work [and] she saved us a lot of money.”

Viola said General Manager of Golf John Malinowski was “hands-on” throughout the project, and that Tuttle was indispensable for his oversight of spending and finances.

“All decisions helped to bring this project under budget … which all the Association should be proud of,” he said. “This is a multipurpose building, designed with the intention to ensure that nobody [is left out].”

Director Frank Daly, who made the original motion to build the new clubhouse just over a year ago, said it was always important that construction occur “on time and on budget.”

He thanked Steen, Stamp and Brown for helping to make that happen, and gave each a token of appreciation on behalf of the Ocean Pines Board. Daly said he met with those three men, very early into the process.

“When I walked out of that meeting, I knew that we were in good hands,” he said.

Sen. Mary Beth Carozza closed out the grand opening on a celebratory note.

“This is a celebration,” she said. “We’re finally out and about, and we’re celebrating something good in what has been a very trying time for our whole country.

“I heard all of the thank-yous and what I heard John say, was that this was a total team effort and it’s all about the good people that you mentioned,” she added.

Carozza said the project “brought good people together.” She called the final product “amazing” and said it made her think about all the people involved, as well as those who can now enjoy it.

“All the good memories that will be built over here in this facility over the years, all the good times — this is what Ocean Pines is all about,” she said. “Really take the time to celebrate this accomplishment!”

To view a video of the grand opening, visit https://youtu.be/wAPrQi3QUCo.