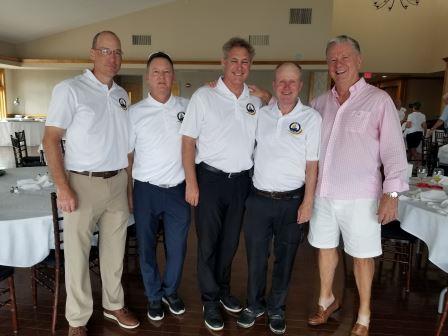 More than 120 golfers and volunteers continued the celebration for the Ocean Pines community’s 50th anniversary at a sold-out tournament at Ocean Pines Golf Club on June 30.
The 18-hole scramble at the Robert Trent Jones-designed course featured a foursome of past and present Ocean Pines head golf professionals, including Bob Haley, who held the title when the course officially opened in 1972, as well as Buddy Sass, Bob Beckelman and current Director of Golf John Malinowski. Former head golf professional Hunt Crosby was unable to participate in the tournament but joined the lunch after at the Ocean Pines Yacht Club.
The event also included a “Beat the GM” contest on the 16th hole with Ocean Pines General Manager John Bailey and a hole-in-one contest on the 7th hole sponsored by Mercedes-Benz of Salisbury that offered participants a shot at winning a new car. Long-drive contests for men and women and a putting contest rounded out the competition.
“The 50th Anniversary would like to give special thanks to Don McMullen, Harry Gowl and John Malinowski for all of their efforts that made the 50th Anniversary golf tournament so special,” said Jenny Cropper Rines, chair of the Ocean Pines 50th Anniversary Committee.
“It was really neat to have the previous golf pros in attendance and to hear their stories of how Ocean Pines contributed to their careers and see how their contributions helped to shape Ocean Pines,” she said.
McMullen, who chaired the committee with Gowl, acknowledged that any credit for the event should be shared with the many people who gave their time by securing sponsorships and prizes and by performing the many tasks leading up to and on the day of the tournament.
“Everything was outstanding and it doesn’t happen unless you have a great group of volunteers,” he said.
The first-place overall tournament winners in the scramble were the foursome of Wes McCabe, Rob Forosisky, John Littleton and Chris Hall. Second-place overall winners were Art Henshaw, Mike Daley, Mike Mason and David Ball.
First-place winners for women were Kathy Monaco, Kelly O’Connell, Donna Scallion and Stevie Parks. Second-place winners were Olga Novy, Geri Fasulo, Meg Herrick and Gail Walukonis.
First-place mixed winners were Deb Salinger, Fritz Lahner and Ray Blosse. Second-place winners were Ron Rider, Carol Rider, Jim Phipps and Connie Phipps.
Maureen Pinnix was the winner of the women’s long-drive contest; Jim Phipps won for the men. Mike Zaia won the putting contest.
Each participant in the “Beat the GM” contest who hit the ball closer to the hole than the general manager received a ticket; Carol Terry held the winning ticket in the drawing.
According to Cropper Rines, several other events are planned for the remainder of the anniversary year, including a historical panel discussion on Thursday, July 12 at 3 p.m. at the Ocean Pines Community Center. The discussion is free and open to the public.
“We have some special guests who have been here since the beginning. July 12 marks the start of lot sales in the Pines. This should be an engaging dialogue facilitated by Dan O’Hare, who is believed to be the first child born and raised here,” said Cropper Rines.
Other upcoming anniversary events are a beach bash on July 22, a time capsule ceremony and a cocktail party on Aug. 11, a racquet sports tournament on Aug. 18 and a boat parade on Aug. 25.
For more information about the Ocean Pines community or 50th anniversary events and sponsorships, contact Denise Sawyer, director of marketing and public relations for the Ocean Pines Association, at 410-641-7717 ext. 3006 or This email address is being protected from spambots. You need JavaScript enabled to view it..