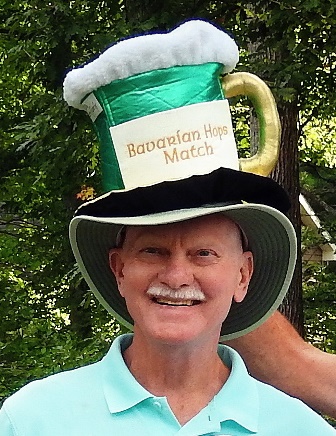 What started out 12 years ago as a fun afternoon of golf for local players has evolved into an annual event that has raised over $20,000 for charitable organizations.
A much-anticipated tournament at Ocean Pines Golf Club, the Bavarian Hops Match – or the “beer match” to its many enthusiastic supporters – was the brainchild of Ocean Pines golf member and resident Ernie Stiles, who wanted to introduce a fun event at the course similar to some he had experienced up north.
“The whole intention was just to have fun with it,” Stiles said. He said he wanted players to enjoy some beer, play some golf and “bust and heckle” each other.
The nine-hole tournament, which is held every fall, is played as a “skins” game with 36 two-person teams competing against each other. The lowest score on each hole wins a “skin,” or a small amount of prize money. If there’s a tie, then no skin is won on that hole and the money stays in the pot for subsequent skins.
The field the first year was 18 players, but word spread and demand quickly grew, so much so that by the event’s third year the number of participants was capped out at 72 players and a waiting list became necessary.
Stiles emphasized, though, that the purpose of the tournament is less about winning money and more about having a good time. He commented that over the years skins winners have even foregone their prize money and given it to the tournament’s designated charities instead.
Although the Bavarian Hops match wasn’t originally conceived as a fundraiser, in the event’s third year Stiles decided to donate the proceeds to his young neighbor, who was battling cancer at the time. The money raised helped the family with travelling and other expenses.
In subsequent years, money has been donated to local organizations Diakonia and the Worcester County Humane Society, chosen, Stiles said, because he wanted to ensure that 100 percent of the money donated would be used for charitable purposes.
This year, two national charities – the ALS Association and the Cancer Research Institute – were chosen as recipients of the monies raised in honor of Ocean Pines Golf Club members Chuck Shelton, who is battling ALS, and Stiles himself, who is battling cancer.
Stiles’ cancer fight left him with little energy to organize this year’s match, so fellow golf club members Don McMullen, Bob Long and Walt Lischak took over the reins, including selecting the charities.
Donations to the two organizations totaled $3,793 this year, bringing the total amount of money donated to charity over the years to $21,869. The money comes from tournament entry fees as well as from player and non-player donations.
For example, Berlin Interventional Pain Management physician Dr. Christopher Galuardi and his wife, Judi, donate $1000 annually to the event. Although they don’t play in the tournament, their love of animals and the Worcester County Humane Society initially led them to support its fundraising efforts, which they learned about from Stiles’ wife, Debbie, who worked in their office.
Other fun elements – which also help to raise money for charity – have been added to the Bavarian Hops Match, such as a chipping contest, a 50/50 raffle and a closest-to-the-pin contest on one of the holes, which is where tournament participants, spouses and friends also gather for snacks, drinks and socializing.
An after-party, this year held at Ocean Pines Golf Club’s newly renovated Tern Grille with over 100 attendees, follows the tournament with dinner and awards. For the first time ever, there was no skins winner this year on any of the nine holes. Ocean Pines golf member Connie Phipps won the closest-to-the pin contest and the right to wear the coveted hat that Stiles and his wife picked up at a store on the Ocean City boardwalk.
Although Stiles had to bow out of the planning of the 2017 match, he’s already thinking ahead to next year and was a fixture at this year’s 16th hole closest-to-the-pin party, where he got to greet all of the players and join in what the tournament does best – offer an afternoon of good-natured competition and fun among friends.
For more information about Ocean Pines Golf Club, contact PGA Director of Golf John Malinowski at 410-641-6057 or This email address is being protected from spambots. You need JavaScript enabled to view it..
For more information about the Ocean Pines community, contact Denise Sawyer, director of marketing and public relations for the Ocean Pines Association, at 410-641-7717 or This email address is being protected from spambots. You need JavaScript enabled to view it..
Photo Caption: “Ocean Pines golfer Ernie Stiles poses with the coveted Bavarian Hops Match hat.” Photo Credit: Margaret Long